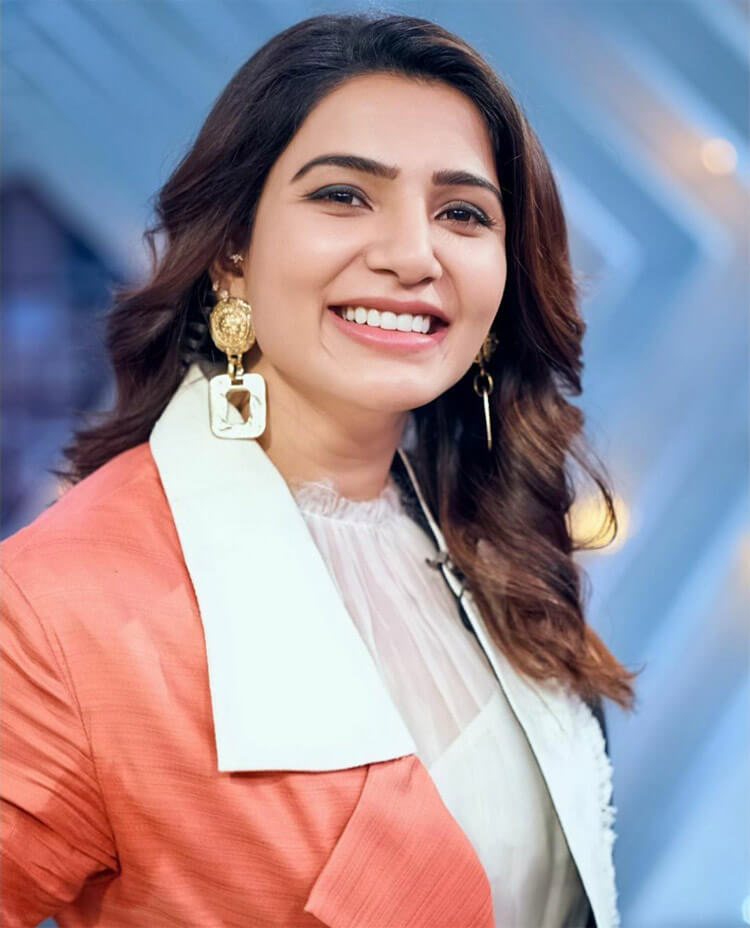 Hello friends…. How are you ? Hope all of you are well right now. Today I will talk about Samantha Ruth Prabhu  Biography. She is an Indian actress who has established a career in the Telugu and Tamil film industries.

She is famous for her beauty and cute smile in her acting career in Telugu and Tamil film industries.

Today I will discuss the Samantha Ruth Prabhu Biography, weight, Date of Birth, Hight, Age, husband. How she became a famous Indian actress, some unknown information about her life, and many more details. So let’s start without delay.

She was born on 28th April 1987 in Chennai, Tamil Nadu, India. She is known to hold a Indian nationality and he  belief in the  Christianity religion. His zodiac sign is Taurus. Her real name is Samantha Ruth Prabhu.

Samantha Ruth Prabhu’s nicknames are Sam and Yasodha. Her father’s name is Joseph Prabhu and her mother’s name is Ninette. She has two brothers Jonathan and  David.

After completing her schooling she enrolled in Stella Maris College, Chennai in Degree in Commerce.

In 2010, She began her professional film career with Gautham Menon’s Telugu film, Ye Maaya Chesave. It was an Indian Telugu-language romantic drama film which was directed and written by Gautham Menon. This film was produced by Manjula Ghattamaneni. The romantic drama film received positive reviews from critics and it was successful at the box office. The box office collection of this film was approximately 15 crore and the budget was 10 core. It was originally released on 26 February 2010. This film fetched her a Nandi Award and the Filmfare Award for Best Debut Actress.

After that she appeared in a cameo role in the Tamil film, portraying an assistant director who becomes an actress. Above two films, both Tamil and Telugu films proved to be grand successes, propelling Samantha Ruth Prabhu to sign on for bigger projects.

She worked on a music video for the World Classical Tamil Conference 2010 promotional song, which was named Semmozhiyaana Tamizh Mozhiyaam. This tamil song composed and produced by A. R. Rahman. It was released on 15 May 2010.

She appeared in the romantic drama film Baana Kaathadi which was actually the third Tamil project signed by Samantha. This film is directed by Badri Venkatesh and produced by Sendhil Thyagarajan and T. Arjun. This is originally released on 6 August 2010.

After that Samantha Ruth Prabhu Work with Telugu language romantic action comedy film Brindavanam which was released on 14 October 2010 and was a critical and commercial success and also got positive reviews. It film was produce by Dil Raju, Laxman and Sirish. This film Directed by Vamshi Paidipally. This drama film became the 5th biggest grosser of Telugu language cinema by the end of its theatrical run and the 5th Telugu cinema to cross the 30 crore Indian rupees share mark.

Akkineni featured in the big budget Indian Telugu-language action comedy film Dookudu. This action film directed by Srinu Vaitla and produced by Gopi Achanta, Ram Achanta, and Anil Sunkara. It was written by Kona Venkat, Vaitla, and Gopimohan. This film was release on 23 September 2011. The box office collection of these films was 101 crore and the budget was 35 crore.

After acting in her 1st women-centric Indian mystery-thriller film U Turn which is written and directed by Pawan Kumar and produced by Srinivasa Chitturi and Rambabu Bandaru. Samantha Ruth Prabhu next starred in another women-centric fantasy comedy film Oh! Baby released on 5 July 2019. Oh! Baby directed by B. V. Nandini Reddy. The box office collection of these films was approximately 40 crore indian rupees and budget was approximately 18 crore indian rupees.

She is an Indian actress who has established a career in the Telugu and Tamil film industries.

Her monthly income in Indian rupees is approximately ₹67000/- only.

Her net worth in Indian rupees is approximately 73 crore in 2022.

1) Her family wasn’t financially well-off, and thus in order to generate some extra pocket money, she decided to take up modelling at a very young age.

2) Her hobbies are Reading, Dancing, and Gymming.

3) She is of mixed origin as her mother Ninette is from Kerala while her father Joseph hails from Andhra Pradesh.

4) She was a bright student and used to top the class all the time.

5) Due to an immune system disorder, she had to take a long break from movies; the use of antibiotics had further deteriorated her condition In 2012. In this period, she lost a lot of film offers.

6) She underwent a nose job surgery, to enhance her looks.

7) She is a philanthropist, who is the founder of the charitable trust Pratyusha Support. This trust provides medical support for women and children from the financially weaker sections.

8) Samantha was diagnosed with diabetes in 2013.

Some FAQ About Samantha Ruth Prabhu

What is the age of Samantha Akkineni?

Who is the father of Samantha Akkineni?

Who is the mother of Samantha Akkineni?

What is the height of Samantha Akkineni?

What is the weight of Samantha Akkineni?

What is the date of birth of Samantha Akkineni?

Friends this Samantha Ruth Prabhu Biography. Hope you are Enjoy the article. If any information is left out, please comment below and don’t forget to share on social media. Thanks For visiting our site.